WHO IS A BACK-END DEVELOPER? 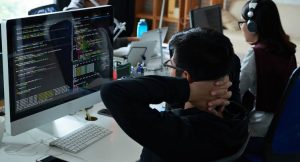 Frontend or Backend? Whichever, both are related but have different meanings. A backend developer builds and maintains the website with the use of technologies, and few programming languages like Java, Python, e.t.c. including some mark-up languages and Query language.

A backend developer is responsible for writing the codes which would only appear on the server-side, such that those codes aren’t visible but enables the functions of the website.

IS BACKEND DEVELOPMENT RIGHT FOR YOU?

Although, back-end seems more logical and technical than Front-end. If you are the type that isn’t after the prettiness of the site, then, you can try back-end.

It isn’t as complicated as you think, it is what one can learn and become expert at with time. The practice is what makes anyone become better in a skill.

It doesn’t matter if you have no prerequisite knowledge, you can easily apply at www.bincom.net/academy . Programming skills like SQL, Laravel, PHP, Javascript, Python and more, including the latest frameworks, are used for easy understanding. A back-end developer basically interacts with the database and the entire data file of the website.

Today, there are lots of easy frameworks like Yii1, Yii2 used by developers to have their website done with no itch. You can be the best Back-end developer or even a Full-stack developer today.

WHAT IS GRAPHICS DESIGN?
WHAT DOES A FRONT-END DEVELOPER DO?